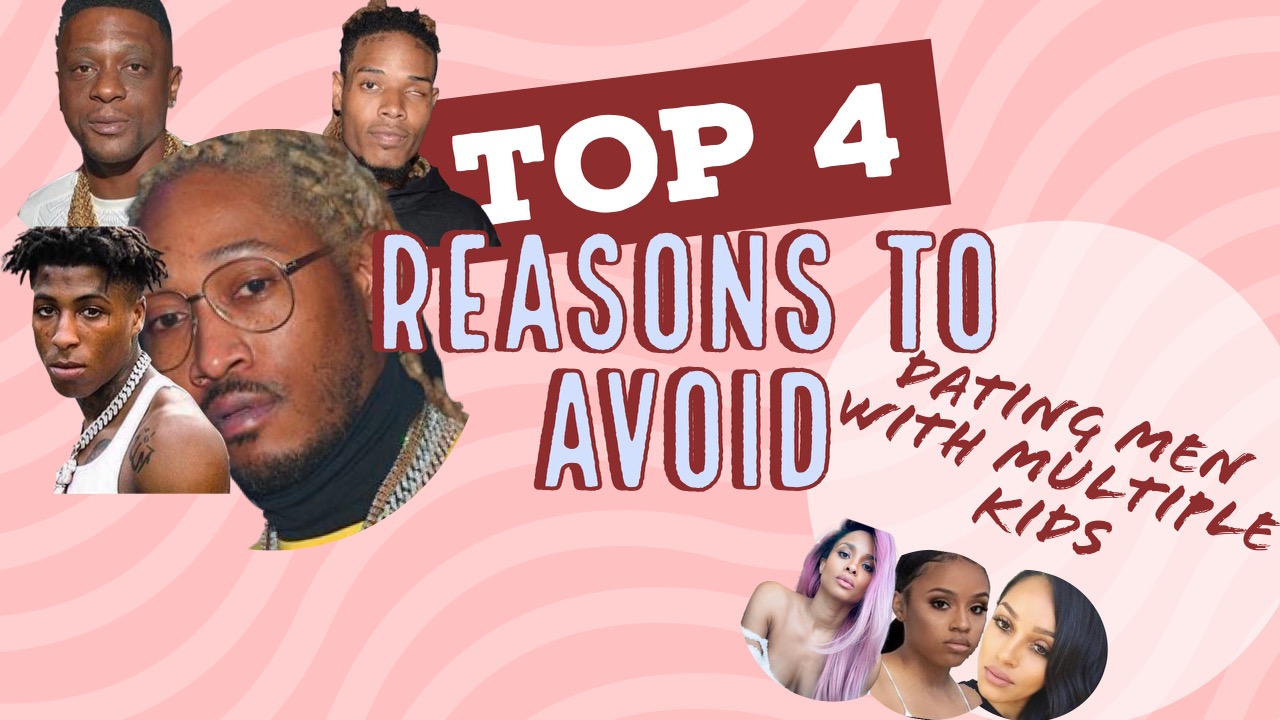 The other day I was scrolling through Instagram, and everyone was discussing how many baby mommas the rapper Future has. A couple of them were even dissing him publically. It all looked very dysfunctional, and yet women continue to date and reproduce with him. And he is not the only one in this situation. For example, NBA Youngboy has six children by six different women. Fetty Wap has seven children with six women. Boosie has eight kids with six other women. As I sat there, I wondered how many children/baby mommas are too many? And whether these women were fully aware of what they are getting themselves into. Were they convinced he changed? Were they trying to trap him? Or was he trying to trap her? Was it for the money? Because I don’t understand why anyone would put themselves in a position to be baby momma number five. And If anyone out there is dealing with a broke man who got mad kids, I have no idea what you are doing with your life, booboo. So below, I have written 4 reason on why you should avoid dating men with multiple children.

First of all, when we meet a man, and he tells us he has kids, our antennas immediately go up. We go through an entire list of questions in our heads, all in a matter of 2.5 seconds. Off top, we want to interrogate. We want to know who, what, when, where, why, how many, and how long. Assessing the situation and gathering as much information as possible is crucial. Before feelings get too deep, you should know what you are getting involved in. If he says he has one child, that may be doable. But when he starts talking about three, four, and five, all by different women, see now I’m looking at him sideways. I’m thinking to myself, what is wrong with him. Something mentally and emotionally must not be right. And it would be in my best interest to wish him well and run in the opposite direction. That is way more baggage than anyone should want to handle. I find it quite ridiculous that a woman will date a man, bypass all the red flags, and then end up pregnant. Now things have gone left, and ya’ll fell out. You are talking negatively about him, and there is all this drama. Regardless of how you got to this point, you have to take some responsibility for the part you played, especially when you had the playbook first hand.

Then there is the children’s mother. And man, that situation can range from fairly decent, good, to the baby momma from hell. One woman alone is a handful. So when we start getting into multiples, I don’t understand why anyone would add that stress to their life on purpose, man or woman. These situations often breed lots of negativity, where lack of respect, unnecessary drama, and tensions run high. Oh, and let us also not forgot you run the risk of him doubling back and sleeping with his baby momma. They say one of the easiest people to sleep with is someone you had a child by. It is familiar, and they may still have feelings for one another.

And I am here to tell you to throw that logic out the window. When it comes to the children, they are the ones who suffer the most. The distance can be an issue if the children live in different cities. Work is also a factor depending on the type of job he has. So the father is tasked with trying to divide his time and balance his schedule. Should you decide to pursue a relationship, how much time do you think he will have to spend with you or a child? If you can avoid it, do not put yourself in a position only to have a piece of a man. It is amazing to know when bae is done taking care of business, that he is coming home to you. Not his place or some other woman’s, because my child and I are selfish, and we don’t want to have to split our time with a bunch of people. We want it all!

Most importantly, we cannot forget about the example we are setting for our children. Ask yourself, would you want your kids following in your footsteps? While I understand things happen, we should not normalize this lifestyle. I think being able to have a family is a privilege and a blessing. One we should not take for granted. We owe it to our children to raise them in the most stable and healthy family possible. If things don’t work out, that is ok. But wouldn’t you want to start with the best possible outcome? Be selective on who you decide to lay down with because some of us are out here building straw houses instead of brick. It takes a lot to raise a child, and they need quality time from both parents. Our actions affect them—and far too many people are pushing their agenda at a child’s expense. And if you thought a baby was the way to keep a man, think again, honey.

Furthermore, I believe some women would have chosen not to get involved if they knew then what they know now. But if you decide to stick around even after knowing all of those things mentioned above, then like Tabitha Brown says, ” that’s your business.” Maybe he says he has changed and is ready for a serious relationship. Or perhaps both of you are just looking to have a little fun, nothing serious. Whatever the case is, contraception should be mandatory until further notice. And if either of your plans is to trap each other, then that’s selfish and unfortunate. Lastly, before I end, if any fellas are reading this, can you please explain why ya’ll like throwing away money? Because the thought of spending thousands on child support would be enough for me to saran wrap my stuff and be very, very selective on who I give the “D” to. “It is my peace of mind and all my money for me.” LOL